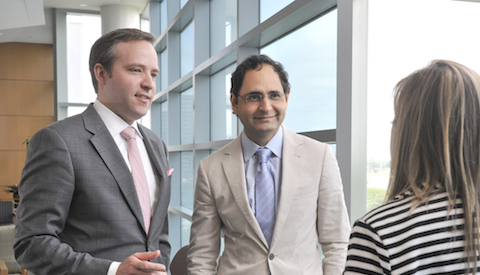 UT Southwestern Medical Center plastic surgeons have developed a new breast reconstruction technique that combines advantages of two different types of microsurgical procedures using abdominal and other tissue to reconstruct the breast after a mastectomy.

Flap-based procedures use a woman’s own tissue taken from the abdomen, thigh, or buttocks to reconstruct the breast. Surgeons have labeled the new procedure Superficial Inferior Epigastric Artery-Deep Inferior Epigastric Artery or SADIE Flap, an enhancement of existing techniques when more traditional flap surgeries called DIEP or SIEA aren’t ideal.

“In traditional SIEA flaps, there can be considerable ‘mismatch’ of blood vessels when bypassed into the chest. This is what can make the traditional SIEA flap inconsistent and unreliable in terms of success,” said Dr. Sumeet S. Teotia, Associate Professor of Plastic Surgery, who developed the procedure with Dr. Nicholas Haddock, Assistant Professor of Plastic Surgery. “In our approach, even though the technique and surgery demands high level of experience with usual DIEP/SIEA flaps, there is no ‘mismatch’ of blood vessels, and the flow of blood is not burdened by any turbulence issues.”

Similar to attempting to attach two mismatched pipes together, one smaller and one larger, it is difficult to get a perfect ‘seal’ of the pipe and the two mismatched pipes can cause turbulence and anatomical mismatch, the surgeons explained. Debris can then build up, causing clogging — or in the case of arteries — clotting. To solve this dilemma, the smaller pipe has to have an intermediary pipe which at one end is smaller and other end larger.

“We have essentially created an ‘intermediate’ pipe system to artery mismatch of the SIEA flap to join the chest side,” Dr. Haddock said. “We bypassed the SIEA into DIEA system, and then that got bypassed into the chest, with no size mismatches and all end to end connections. In this case, there no ‘debris’ build up into arterial system. The high flow system of the chest keeps everything streamlined into the smaller system as it flows in and out.”

The SADIE flap surgeries are complex and require a team of experienced microsurgeons, who already have high success with traditional DIEP/SIEA flaps, they noted. “This type of work is at the level of Super-MicroSurgery where instruments used are specifically designed for such procedures. We already have experience with this in our other multiple-flap based techniques,” Dr. Teotia said. The UTSW surgeons have completed three such surgeries, and hope that with more experience they can expand the use of the traditional SIEA flap as well.

UT Southwestern Medical Center was among the first in the world to offer a four-flap breast reconstruction, using fat and skin from the back of each leg and from two spots on the stomach to reconstruct natural breast materials. UTSW breast microsurgical team already has one of the largest experiences in the world with multiple-flap based surgeries combined from different parts of the body.

Dr. Haddock is a pioneer in the surgery from back of the thigh, and his expertise, combined by Dr. Teotia’s pioneering work in multiple flaps from the abdomen, continues to improve the aesthetic outcomes for patients seeking a high level of breast reconstructive care. The breast reconstruction program continues to gain recognition nationally.

Dr. Haddock would love to hear your feedback.

Our paper describing breast reconstruction with a combination of LAP and DIEP flaps was published t[...]

Our paper was published in #PRSJournal describing a new way to manage the belly button with DIE[...]

Dr. Haddock is invited faculty at the Virtual Penn Flap Course. He will be presenting on DIEP flap[...]

Dr. Haddock was selected to the 2019 Texas Super Doctors® list. This will be published in December [...]

Dr. Haddock and his team use an enhanced recovery pathway when performing breast reconstruction with[...]

Dr. Haddock presented his work this weekend at the Texas Society of Plastic Surgery on his first 200[...]

Dr. Haddock was invited faculty to the Atlanta Breast Surgery Symposium. This is world class meetin[...]

One of the cornerstones of my practice is to ensure my patients are fully educated on the options av[...]

New Article on the PAP Flap published by Dr. Haddock

This paper presents are first 101 PAP flaps and the lessons we learned in our early experience.  It [...]

Dr. Haddock and Dr. Teotia had six presentations this year at the American Society of Reconstructive Microsurgery

Dr. Haddock and Dr. Teotia had six presentations this year at the American Society of Reconstructive[...]

Click to see the original article You may not think of surgery as an artistic process, but UT Sou[...]